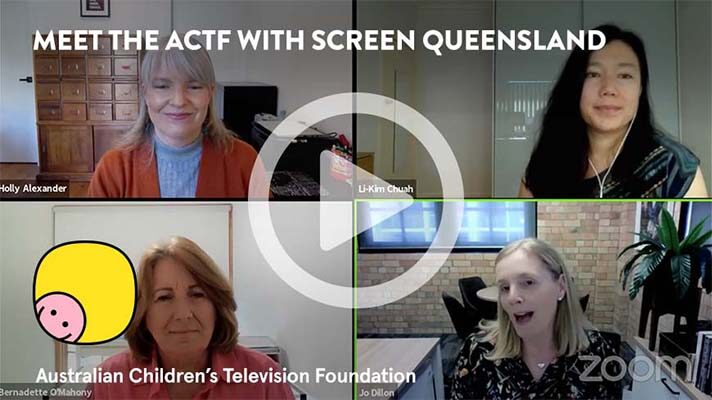 Five key tips for securing funding for your children’s show

Last year, the Commonwealth Government announced an additional $20 million in funding for the Australian Children’s Television Foundation (ACTF) to invest in high quality screen content specifically for Australian children, which reaches and connects with them through all the different platforms children engage with.

That funding began flowing at the beginning of this financial year. So far, it has gone towards the development and production of a broad and diverse range of projects from producers all around Australia, including live action children’s dramas, animated series and factual series, as well as an initiative with Stan which will give a creative team the chance to create a feature length film.

Last month, members of the ACTF’s highly experienced content team provided insights into working with the ACTF and the children’s content market via a webinar hosted by Screen Queensland, aimed to assist creators in bringing their ideas to life and thinking about both the market and their audience.

Here are some of the key takeaways from the webinar (or you can view the recording here).

Got an idea? Speak to us.

The first step in applying for funding from the ACTF is to get in touch to ensure that a project is eligible for funding and meets the prerequisites for the application.

If you’ve got an idea for a children’s show, Development Manager Holly Alexander recommends reaching out early in the development process. “The best way to start working with the ACTF is to bring a project through the development door,” she says. “It’s not the only way, but if you’re likely to be looking for production funding in the future, it’s a really good way to start building the relationship with us, and for us to track a project’s development.”

The ACTF’s experience across development, production, and distribution provides the team with a unique understanding of the local and international children’s markets, allowing them to provide advice and assess whether there’s likely to be a market for your ideas, and provide insight into what’s already out there.

Head of Content Bernadette O’Mahony says getting in touch early can save you time and money, ensuring you focus on concepts that will have a potential market.

“We know kids’ content and the market here and internationally better than anyone in Australia, having built our relationships over 40 years and with a brand known around the world,” she says.

“We are talking to all the various broadcasters who screen children’s content that are operating here in Australia and internationally regularly. Our distribution team have access to the market and broadcasters around the world, and on top of that, I’m talking to the commissioners of all the streaming platforms regularly around what they’re looking for – the genres, the age groups, all those sorts of things.

“We don’t want people to waste their time spending years developing something for which there isn’t going to be a market, or for which there’s something already in production internationally.”

The team is also happy to hear from creators at any stage of the development process – and not only from those who are after financial investment.

“The ACTF not only provides funding but expertise and advice on development, the market, and financing, so feel free to come and talk to us as your children’s project develops,” says Bernadette.

Make it unique, authentic and timeless

The ACTF’s purpose is to make Australian children’s lives better through screen content that reflects the organisation’s culture and values of inclusion, diversity, resilience, imagination, having fun and striving to be our best selves.

We support the creation of new children’s programs that have an Australian voice and point of view, and which children, parents and educators will find engaging, entertaining, accessible, creative and innovative. Children’s television programmes influence how children think about others, and themselves, building empathy, kindness, social cohesion and shared values.

To be considered for funding, it’s essential that a show is unique, authentic, distinctly Australian – and 100% child focused.

“We put children first and we’re very clear about that,” says Bernadette. “The audience is our whole reason for being. The projects we support will have a pathway to the Australian child audience.

“Many of our shows have been award winners, here and internationally, and mainly that’s because they have a strong Australian flavour and a unique voice, so they stand out in the market.”

It’s also important that projects have longevity, remaining relevant and accessible for children for many years to come. Many ACTF shows remain popular years and even decades on. Round the Twist, which was filmed between 1990 and 2001, has become an Australian television icon, and was recently picked up by streaming giant Netflix.

“The shows that we distribute – we really love them and we care for them,” says Development Manager Li-Kim Chuah. “We want them to have a really long life and to reach as many people as possible, so we’re always looking for opportunities to promote and sell shows, even from the old back catalogue.”

The advent of on demand streaming platforms has changed the face of the industry. A series no longer has to fit into rigid parameters demanded by traditional broadcast schedules, meaning more flexibility around the number and duration of episodes.

Bernadette says in recent years ACTF shows have broken new ground in terms of genre and format, and creatives needn’t try to make their show fit into a certain box.

“What’s coming through loud and clear is that a unique story with a strong voice has greater value than sheer volume of episodes,” says Bernadette. “For example, First Day is only four 24 minute episodes. It’s been received well around the world, it’s been sold widely, primarily because of its strong point of view, its uniqueness, its important message, and the role model that it provides.”

Diversity is one of the ACTF’s core values. We need an array of Australian stories, from different producers and from around our country, reflecting the full diversity of children and their lives on all the platforms children turn to for entertainment. Quality local content exposes children to a range of faces and voices that is genuinely representative of their community.

“It’s particularly important in kids’ TV that we reflect the world that they are growing up in,” says Bernadette. “That’s not to say that every show needs to tick every diversity box – it’s got to be the right thing for the right story, it’s got to be authentic. The show’s not going to get up unless it’s authentic.

“It’s not just about diversity on screen, it’s about diversity in the creative space – in the writer’s room, in that characters are being written from the point of view of somebody who has that lived experience. It’s really important, and it can’t be tokenistic, it has to be authentic.”

Development applications are submitted through the ACTF website, and deadline dates can be found on our funding page. Applications are considered several times a year, subject to the available funding and demand. Funding is also available for production.

“Broadly, what we’re looking for is the relevance and potential appeal to our Australian children’s audience, the originality of the idea, and quality of the existing materials,” says Holly. “We [also] look at the experience of the team involved and also any existing broadcaster interest.”

The process is competitive, but Bernadette says initiating an early conversation can be helpful.

“Sometimes people will ring us up and say, ‘hey, I’ve got this idea, I’ve only written a couple of pages – what do you think of this, is it worth continuing on that?’, and we’re happy to have those conversations,” she says. “Our door is open.”

And if you’re unsure or confused about any aspect of the application process, the team is happy to offer guidance.

“Part of that conversation is to try and give you advice about what’s going to make your application strongest, so that you can go away and put together the strongest application that you possibly can.”

Visit the ACTF website to learn more about applying.