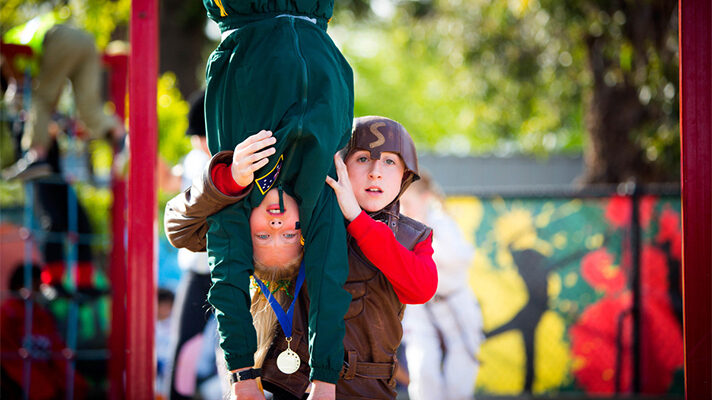 While at school, children and young people develop important social skills and learn how to manage emotions to maintain positive interactions with one another. These skills provide a solid foundation in making and sustaining friendships. Over the past two years, however, widespread school closures have kept many students away from their peers for long periods. These closures and lockdowns can isolate children and young people at a crucial time of social and emotional development.

Having taught mainly in Years 4 to 7, I have found that each age range and cohort of students brings its own developmental challenges. The Australian Children’s Television Foundation (ACTF) provides a variety of rich Australian content that helps teachers of varying age ranges to tackle important social and emotional skills in the classroom.

Little Lunch is an eminently relatable mockumentary with heart for primary-aged children. In the episode ‘The Principal’s Office’, cheeky protagonist Rory is sent to the principal’s office as a consequence of misbehaviour. Rory’s peers feel sorry for him and try to cheer him up. After watching the episode with my class, students discussed the events in groups and plotted the narrative on a story graph. They were then able to identify the ‘theme’ of the episode: empathy. We located specific examples of empathy within the episode, such as body language, gestures, tone, and facial expressions. Having observed, discussed and reflected on the scene, the students were better placed to empathise with others in their own lives.

Sharing is another important social skill for children, one which almost every teacher at every year level addresses at some point. Sharing allows students to make – and more importantly, maintain – friendships, play co-operatively, take turns and manage disappointment. It also teaches children about negotiation and fairness.

In the Little Lunch episode ‘The Monkey Bars’, Tamara refuses to share the monkey bars but her friend Melanie won’t give in and get off. After viewing the episode, I asked students draw on a similar personal experience to write a short vignette from Melanie’s perspective, ensuring they captured their feelings and emotions from the time. From this perspective, students recalled being on the receiving end of ‘greed’, ‘hogging’, ‘selfishness’ and ‘monopolising’. However, after writing an alternative vignette from Tamara’s perspective, students reflected on a time that they too were ‘selfish’, planting the seed for them to manage future situations differently.

Each Little Lunch episode has a theme that can be explored as a class, potentially through a unit of work. ‘The Joke Competition’ deals with confidence, ‘The Body Bus’ delves into anxiety around perception and self-consciousness, jealousy is the theme of ‘The Relationship’ episode, and resilience is depicted in ‘The Corridor Outside 6E’. The Little Lunch App was a perfect way for me to bring together students’ learning on these themes. The App allowed students to work in small groups to demonstrate and share their understanding of a social or emotional skill in an interdisciplinary way (literacy, media arts and drama). The App is essentially a storytelling project that provides a step-by-step guide for creating a short episode, just like the TV series. What students didn’t necessarily realise is that through collaboratively creating their episodes, they were actively practicing some of these target skills: co-operation, managing conflict, managing their own feelings, empathy and sharing.

The Inbestigators is another series that lends itself to an interdisciplinary approach in the classroom. In ‘The Case of the Unhappy Camper’, Mr. McGillick’s phone goes missing and Kyle is accused of hiding it. Linking to media arts and literacy content, students watched the episode for homework and identified the themes of the episode. Working collaboratively online, students shared their ideas on a Padlet wall. They were then paired together to create a short podcast conversation about responsible decision-making, using the episode as an anchor point.

I have also used the Australian series Hardball to teach social and emotional skills in an engaging way. In the episode ‘Sorry Salwa’, Tiff secretly films and uploads an embarrassing video of Ms. Crapper dancing – then frames Salwa. With many young students having access to social media, our class used this episode as a provocation to explore values, relationships and the feeling of guilt. Then, inspired by daytime television, students applied their knowledge by independently exploring further themes and discussing them in a class ‘chat show’. Groups of students watched a given Hardball episode to identify a social or emotional skill that could be explored as a chat show topic. Students researched and discussed events which could lead to conflict around their skill, and how this issue could be resolved. I then set up seating for the chat show ‘guests’ and audience, and introduced students to the ‘stage’ for an ad lib discussion. The children demonstrated the skills of sharing airtime and supporting others when they were nervous (as I did have a camera rolling, complete with external microphones to add to the experience!).

These Australian television series made for children, and about children, have supported me as a teacher in developing important life skills in young people. With a combination of flipped classroom, explicit teaching, modelling and role-playing approaches, these TV series provided authentic opportunities to learn social and emotional awareness, relationship skills, and to analyse and explore verbal and non-verbal communications between peers.