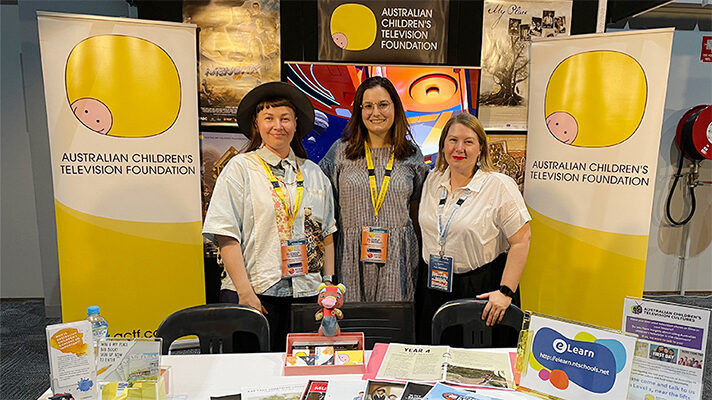 The annual AATE ALEA National Conference brings together a diverse group of educators from across the country, motivated by their shared passion for professional learning, best practice teaching and improving student literacy outcomes.

This year, classroom teachers, school leaders, academics and educators from non-school settings engaged with a four-day program centred on research into practice, Aboriginal and Torres Strait Islander education and school improvement case studies. As a major sponsor, the ACTF sought to advocate to this audience for the role of locally produced and culturally relevant content in the literacy classroom – Australian stories for Australian children.

The ACTF was also an exhibitor at the conference, giving our team the chance to connect individually with educators and learn about their teaching contexts. The ACTF Learning team used this opportunity to highlight learning resources and events that support learners in viewing, analysing and creating screen stories in the classroom and beyond. Frequently asked questions emerged throughout the conference, with many teachers interested in:

The Northern Territory Department of Education also had a presence at the conference. Among their messages to local educators was the availability of ACTF-supported content and resources in the department’s eLearn portal. Teachers in Northern Territory government schools can now stream more than 20 ACTF children’s titles through eLearn. To access complete TV series, films and supporting educational resources with relevance across the curriculum, NT teachers simply login with their ntschools or nt.gov.au username and password.

In another conference partnership, our team supported researchers from Australian Children’s Television Cultures (ACTC) who were conducting interviews about the educational use of screen texts. Based at Swinburne University of Technology and working in partnership with the ACTF, this research group is currently undertaking a four-year investigation into the role of local screen entertainment in people’s lives, memories, families and education. ACTC’s current research strand focusses on screen content in the classroom. The team are still welcoming contributions from educators; they can be reached by email.

In addition to sponsoring and exhibiting at the conference, the ACTF Learning team delivered three workshops, providing different lenses for incorporating screen content in classroom teaching. First Nations Learning Designer April Phillips delivered a workshop titled ‘Across All Times: First Nations perspectives of time in diverse screen stories’. Drawing on clips from ACTF-supported projects including Red Dirt Riders and Yolngu Boy, April explored narrative possibilities including circular time, overlapping moments, futurism and living memory. Focussing on the locally filmed motocross series MaveriX, Creative Learning Manager Bridget Hanna brought scriptwriting knowledge and skills to life in her session, ‘Visual storytelling: The art and language of scriptwriting’. Participants took part in a ‘table read’ of the script then developed their own short scripts based on personal teaching experience. And in a workshop titled ‘Building empathy in the primary classroom with Australian screen stories’, National Curriculum Manager Janine Kelly explored content which highlights the diverse perspectives of people in our communities. Drawing on series including First Day and Woven Threads, this session provided classroom resources and strategies which model and scaffold student empathy.

The team also enjoyed the opportunity to alert teachers to upcoming children’s series, including Barrumbi Kids. This locally produced live-action series tells the story of best friends Tomias and Dahlia – two best friends growing up in a remote Northern Territory community. Through fishing, hunting and schooling, the children learn about themselves, each other and living in both Aboriginal and non-Aboriginal cultures. Based on the popular book series by Territory author Leonie Norrington and filmed in NT, this series will air on NITV later in the year. The ACTF will also be developing education resources to support teachers using Barrumbi Kids in the classroom.

After four days of learning and conversation, the ACTF Learning team left Darwin inspired, with new connections across the country and innovative ideas for our work. Well done to the conference convenors and steering committee on presenting such an engaging and successful program of professional learning.

Janine advocates for inclusive and representative screen stories that engage children, affirm their identities, and build empathy in the classroom and beyond. This focus is emphasised in the learning content, programs, and experiences she produces and in her outreach to teachers and schools. Before joining the ACTF, Janine taught in a range of educational settings locally and abroad.