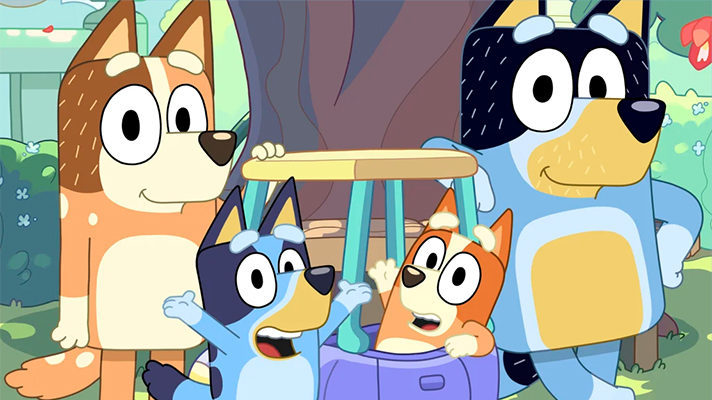 Brisbane-made children’s show Bluey is an example of children’s programming being successful and profitable. CREDIT:LUDO STUDIOS

The issue of local content on Australian television has reared its head again with news last week that the Seven network has halted the production of children’s television and Nine boss Hugh Marks saying his network was looking at doing the same.

It’s a subject that comes up about every six months, particularly in the last three years since former federal communications minister Mitch Fifield announced an inquiry into local content on TV and radio and achieved precisely nothing in the process.

Seven’s new boss James Warburton is in the slash and burn stage of stopping his network bleeding money. It started weeks into his tenure with mass redundancies at the struggling network, and continues now with his eye firmly on the broadcaster’s poorly performing children’s television output.

C-rated content, he argues, costs a lot and hardly anyone watches it, so Seven shouldn’t be obliged to make it under the terms of its licence agreement with the government which allows it to broadcast.

Hardly anyone watches it because a lot of the children’s television made in Australia is absolute garbage that is created purely for the purposes of fulfilling the licence obligation rather than in the interest of creating television that parents might want their children to watch.

Among the shows Seven is threatening not to screen any more are Flushed, a kids’ game show which is as intellectual as the name suggests; Get Arty, a craft show with a jaunty soundtrack that kids are supposed to watch before school, and its sister science program Get Clever.

Nine had kids’ sports game show Smashdown! last year, but it is yet to return to the schedule along with the Kellyn Morris fronted science show BrainBuzz among others in its locally produced line-up.

It is blatant posturing from the networks. A blinking competition with current communications minister Paul Fletcher. They threaten that they aren’t going to make any more children’s television due to the arduous requirements of their licence conditions in the hope Fletcher will step back from the fight and remove the requirements.

If Seven blinks first, Fletcher could find the network in breach of its licence conditions, stop it from broadcasting and save Australia from another episode of First Dates.

The situation is unprecedented. What would actually happen in a licensing sense if Seven carried through its threat is somewhat of a mystery, even to the Australian Communications and Media Authority which is responsible for policing the licence.

What should happen is Minister Fletcher should find Seven in breach, turn off its signal and not allow it to broadcast until it meets its obligations. A licence to broadcast to the nation is a privilege, not a right, and there are responsibilities that come with that privilege. If the broadcaster is not able to meet its obligations because of years of poor programming decision making, that is not the fault of the government or the viewer, but the fault of the broadcaster. It is their duty to do better.

If the network were operating a liquor licence and broke those conditions its liquor licence would be revoked. A petulant tantrum is not, and should not, be the way government policy is created.

But government policy does urgently need to be created that is in step with the current operating conditions broadcasters face. These rules were made before the internet and, as for many sections of the media, the advent of the internet has created some challenges for TV. The government has held multiple inquiries and conducted hours of hand-wringing that has achieved nothing.

Fletcher and his department must stop sitting on their hands, recognise the contribution screen arts makes to the economy – more than $3 billion in the 2014/2015 financial year – and the cultural value in seeing Australia reflected on our screens that cannot be measured.

The Australian communications bureaucracy also needs to urgently find a way to level the playing field between free-to-air broadcasters who pay to broadcast and the streaming platforms like Netflix, Stan, Amazon Prime, Disney + and Apple TV+ who do it without paying and without the same regulation. Stan is making huge inroads making content here, Netflix dipped its toe in but appear to have given up. Prime has a reboot of Packed to the Rafters coming, but nothing else has been revealed. Disney and Apple don’t even seem to be aware Australian content exists. They have a duty to support our screen economy or frankly, they can bugger off. The relationship can’t only be one directional.

A significant portion of the local content debate revolves around Australian drama, and that is an important conversation to have because preserving Australian storytelling is essential. But demanding broadcasters continue to make and screen local children’s content is just as important.

As it stands, the only broadcaster really managing any success with television for young people is the ABC who does it on the measly funding provided by the government and without the ability to draw advertising revenue from it.

It doesn’t need to be as diabolical as Warburton makes out. Bluey is one of the most successful Australian television programs ever made. It is screened around the world. Matchbox Picture’s kids show Nowhere Boys, while not strictly C-rated, is a prime example of making content that is suitable for children that has not only been critically and financially successful, but has been exported to markets all over the world, watched on public broadcasters and streaming platforms alike.

Surely the creative minds at our commercial TV networks (less so the bean counters) could stretch their minds to emulate such successes.

Nine is the publisher of the Sydney Morning Herald and the owner of streaming service Stan.

This article was originally published in the Sydney Morning Herald on March 1 2020. This article is licensed by Copyright Agency. You must not copy this work without permission.

Nathanael Cooper is the deputy culture editor at The Sydney Morning Herald and The Age.