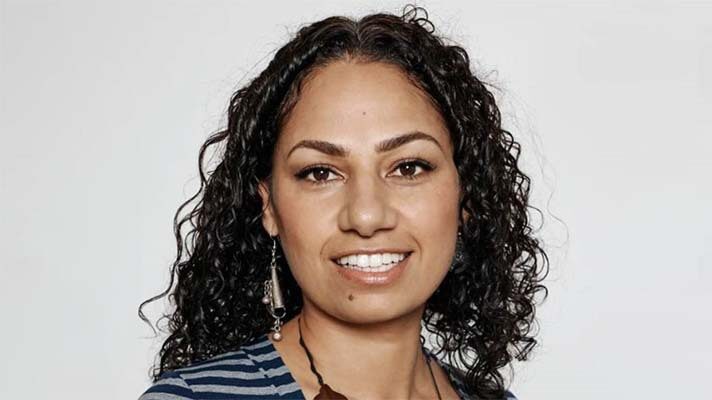 A Bundjalung woman from Tweed Heads, Kyas Hepworth has spent her entire career working in the screen and creative arts sector, with experience across feature films, documentaries, television series and shorts.

Exactly a year ago, SBS announced that Kyas had been appointed the Head of Commissioning and Programming for NITV (National Indigenous Television), driving the creative direction of the network’s distinctive offering across commissioned and acquired content and overseeing its programming and scheduling to bring it to audiences. She is responsible for the development and delivery of NITV’s acclaimed commissioned content slate, which sees the channel work with Australia’s Indigenous production sector across factual, scripted and children’s programming.

Ahead of the premiere of the third season of award-winning children’s animation Little J & Big Cuz, we sat down with Kyas to find out more about her goals for NITV children’s content, why it’s important for Indigenous children to see themselves reflected on screen, and – of course – what our favourite cousins Little J and Big Cuz get up to in Season 3.

Tell us about your goals and ambitions for NITV children’s content.

The reason why children’s has been sort of a cornerstone for NITV commissions is that the highest proportion demographically of First Nations Australians [that is] growing is under the age of 25 – which is really interesting. I think that we have a really, really strong place within the ecosystem of children’s content… [NITV] is a place where you have that editorial and authored First Nations perspective. Do we have the subject matter and the beautiful stories which reflect [what it means] to be a contemporary First Nations person, Aboriginal or Torres Strait Islander, living regional, living remotely? Are we seeing our stories told with our own voices? And bigger than that, is it being authored and created by First Nations storytellers? Yes. Are we developing and securing and growing our own sector? Yes.

If you look inside the content itself, it is accessible to all Australians. You’re getting primary school teachers, you’re getting high school teachers from all walks of life looking at this content and going, ‘I can discuss this subject matter, I’m excited by this, all the kids in the class are excited by this’. Then on top of that, all the Aboriginal and Torres Strait Islander kids can go, ‘I celebrate like that, that’s how my family is, my nanna’s a big part of my life’. So it’s then positioning it then nationally so that as a nation, First Nations stories are shared by everybody, but the gift that is NITV is we champion and support and advocate for Indigenous authored stories cutting through and key creatives being First Nations working within the media sector.

Where do I see us going? I think that we just keep laying the foundations of making really, really entertaining stories from a definitively Blak perspective. And this is what I love – it’s about us, by us, for all. That is absolutely to the core of what NITV commissions – how we work and how we look and go into projects.

We’re edging forward further in animation, but we need to grow more… it’s a significant part of our slate.

How important is it for Indigenous children to see people that look and sound like them and have similar relationship dynamics reflected on screen?

It’s something that came out of the UN Declaration of First Nations’ people’s rights – that we have the right to author-tell our own stories in the media. For me it’s about empowering and giving a voice to our creatives, because they’re the ones who find the nuance and the joy and make an entertaining story.

When you are looking at all the wonderful, eclectic, multi-genred, different platformed children’s work that exists, how many of them speak with an Indigenous voice, and what is that voice? We’re not homogenous – we are so diverse. A Palawa will speak differently to an urban Koori who will speak differently to a Murri whose family is from Mackay but they reside in Meeanjin. For me, it’s being able to show that there’s not one representation, and that it’s entertaining – we want our kids to want to see it.

So there’s that primary goal of ensuring that Indigenous children see themselves represented on screen – do you also see NITV as a vehicle to educate non-Indigenous Australian kids and demystify elements of First Nations’ culture?

Although I know children’s content is educational, what we do is we actually position and lean into the entertaining. Children learn a lot through song, children learn a lot through play, and so a part of it is – if you’re going to sing the tune of Little J, if you’re going to wish you had a nanna, if you’re going to want to explore and get the coolest shells off the beach on NAIDOC Week, for me it’s another way to approach a conversation and awareness and celebration. So people think, “oh, NAIDOC Week is our week where we get to celebrate as Australia that we have this amazing First Peoples and culture which is from our country.” So, whilst yes technically there’s education around it, it’s the way it’s presented and approached.

You have some co-commissioned content, such as Little J & Big Cuz, as well as content which is exclusive to NITV. How important is it for you to have that exclusive content?

Part of being a broadcaster is we need audience, we need reach. And if [content] is shared, the reach and the access – whilst we have created it together – the numbers will be split. We need a moment to show we’re a significant player in the ecosystem.

We have a special part of our programming called Jarjums, which means children’s programming. We have it in the morning, we have it after school, and then we’re also increasing how we house things on On Demand. So, we need that time to set up that foundation. If people go, “oh, I can just grab it over here on another network”, we’ll never be able to tell that narrative of how we have a significant place in the landscape. That’s really vital.

At the end of the day, we really genuinely want to make content that we hope gets picked up globally. That’s the next step. You look at the First Nations storytelling and our featured films travel, our documentaries travel… and our children’s content will do that too.

You mentioned that you’re wanting to grow in terms of animation. What other sort of children’s content is NITV looking for?

I’m looking for the best content. I’m not going to limit it to a specific – I’m not going to say “just live action” – it could be factual, it could be a light entertainment kids’ quiz show… the element underpinning it is, “are you wanting to speak to our audience? Are you wanting to push broader and make something which is universal? [Are] the concept and the creatives able to deliver on that?”

I wouldn’t say just animation, but I see it as an area that’s “let’s develop that space”. I think there’s an opportunity to grow more talent in that space, but to do that, you need to make more productions, so it’s this cycle.

If someone were to pitch a show to you, what would you need to see from them?

Come in early – don’t come in developed, come in the initial stage so we can discuss what’s on our slate, and do your homework. See what has gone on from any network in the First Nations children’s landscape. What is out there? Also, be ambitious: aim to get the biggest and the best, above the line First Nations creatives attached to your project.

What projects are you working on that you’re particularly excited about?

Season 3 of Little J & Big Cuz is now on air on NITV and available through SBS On Demand and NITV’s interactive Little J and Big Cuz webpage. What do you love about the new season?

That they’re back! That they’re going out into environments and telling stories that are going to excite our jarjums, that they’re going to have Nanna back and Old Dog and are showing things which are important to our community – not only the Aboriginal and Torres Strait Islander community, but the Australian community. They get to bring into children’s homes things that they experience at school themselves, and there’s real empathy and understanding of the little concerns that our kids can have and worries that they have going to school, but also the joy of knowing other people can see them and that there’s no shame in getting stronger or calling out when you need a bit of support. It’s a pretty special series – I think they’ve gone above and beyond for Series 3.