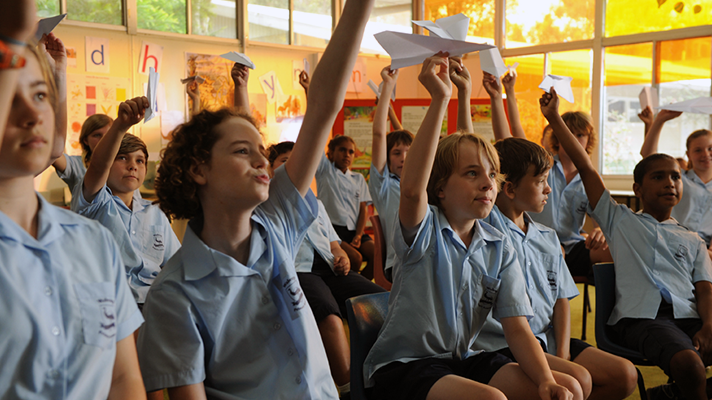 Why I Support Australian Children’s Television

In January last year I joined the Australians flocking to take their children and grandchildren to see Paper Planes.  Every seat in the cinema in Perth was full, and I reflected on the discussion at the ACTF Board meeting three years earlier, when we talked about investing in this project.  The question we had asked ourselves was whether or not Australian families would take their children to see an Australian film in the school holidays, when it was up against whatever Disney, Pixar or Dreamworks would have in store for them when the film came out.  As it turned out, around one million Australians saw the film in the cinema, and many more are now buying or renting it to watch at home, before it goes to air sometime this year or next on the Nine Network.

Looking forward to this movie. First movie we’ve been to as a family since Noah was a baby. Hopefully he can last the distance as I’ve heard good things about it #paperplanesmovie #roadshowfilms

The response to Paper Planes is an overwhelming endorsement from Australians everywhere that there is immense public value in creating film and television for children that reflects their lives, their country, their voices and experiences back to them.

The value in supporting our film and television industry to provide these programs for children is not simple industry protectionism – it is an investment in our culture, a statement about the type of country we want our children to grow up in and a means to inspire children to dream Australian dreams.

But in television, in particular, it’s getting harder and harder to do that.

Currently, “live action” drama and “animation” are treated equally as “Australian drama” under the various subsidy, tax and regulatory arrangements that are intended to deliver quality Australian drama to Australian children.  Animation is easier to finance internationally and is increasingly dominating the type of children’s drama being acquired by the commercial broadcasters.  Animated series spoken in American or British accents which don’t look or feel Australian are qualifying as Australian children’s drama, because an Australian producer is involved in the financing.

Meanwhile, at the ABC, recent funding cuts have been applied disproportionately to children’s content. In the first three years after ABC 3 was established with special funding provided by the Rudd Government, the ABC delivered dramatically increased levels of Australian children’s drama and other formats for children’s audiences.  But in the period since then, with the tied funding for the children’s channels rolled over into the general appropriation, the levels of new Australian commissions on the ABC children’s channels have fallen.  At the same time, Screen Australia is proposing to reduce its investment cap in individual children’s drama series in response to its own budget cuts.

If investment levels fall, children’s live action drama, with its unique cultural values, is in danger of disappearing off our screens altogether.  Programs like Round The Twist, Mortified, Lockie Leonard, Dance Academy, My Place, Ready For This and Little Lunch will just not be able to be financed and produced any more.

The film and television industry is in a period of enormous change and perhaps audiences have more choice than ever, but not if the reality is that this choice all looks and sounds the same and comes from a few enormous global corporations.  I believe that we need to carve out an independent space amidst all the dross for quality children’s media, invest in Australian stories and ensure that children get to find them and own them.  I believe that most Australians from all walks of life and all points of view really want that for our children.  And I think that policy makers and governments of all persuasions want that too.  I just don’t think they know how hard that is to achieve.  But as the sands in the media and entertainment industries shift, we need to ensure that the fragile way our support for locally produced children’s television is held together is reinforced and made stronger.

Janet Holmes a Court is the Chairman of the ACTF Board.  She is passionate about the arts, the environment, children’s television and human rights.  Janet believes that you need to participate in life to get the most out of it.