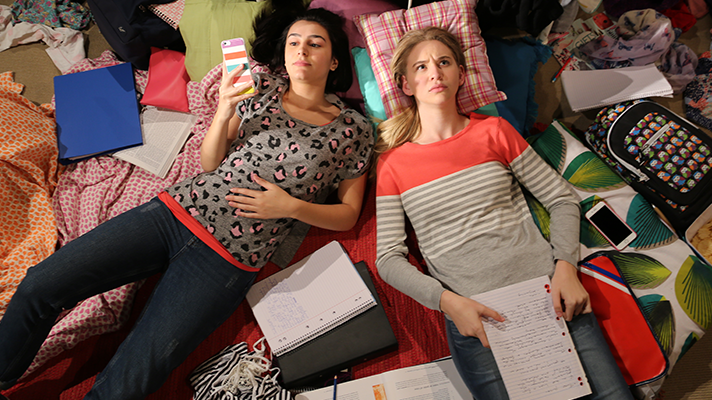 To the attendees of the Screen Forever panel: ‘Millennials – WTF do they want and HTF do we work with them?’ we propose a simple solution. Offer us a seat at the table, and we’ll be more than happy to break bread.

Hello. My name is Holly, and I’m a millennial. I was born between 1982-2002, I’m a ‘digital native’, a ‘victim’ of negative gearing and it’s been two days since my last avocado.

I recently attended Screen Forever for the first time and enjoyed it for the fantastic learning opportunity that it was. I heard from producers who’ve made some of my favourite films and TV shows; people I look up to and aspire to work with. To say that I was conscious of my age and level of experience would be an understatement. Every ‘under 34 year old’ at the conference caught my eye as I started to get a picture of a division within our industry.

Diversity emerged as an important theme throughout the conference as panellists spoke on the importance of telling unique, authentic stories from a wide range of backgrounds and employing people from equally diverse backgrounds to bring our stories to life. It wasn’t just about cultural or ethnic diversity it was also socio-economic diversity, gender and age. In the Hector Crawford Memorial Lecture, presenter Posie Graeme-Evans highlighted the need to include young people in the industry and the importance of doing so in a reliable, structured way, suggesting ideas like quotas to train inexperienced crew attached to funding from state and/or federal government agencies. It was encouraging that this issue was raised in such a prominent address to the industry. Time and time again, a message emerged from panel discussions; coming together is vital to building a sustainable film and television industry.

On Thursday morning we came to a panel discussion called ‘The Millennials – WTF do they want and HTF do we work with them?’ The very name of the session and fact that it was so well attended is proof of a divide which is basically between young and old; between the inexperienced and the experienced. We might not like to admit it but a competition has emerged between us. Thursday’s discussion revealed how misconceptions are holding us back and encouraged all to see the benefits of working together. 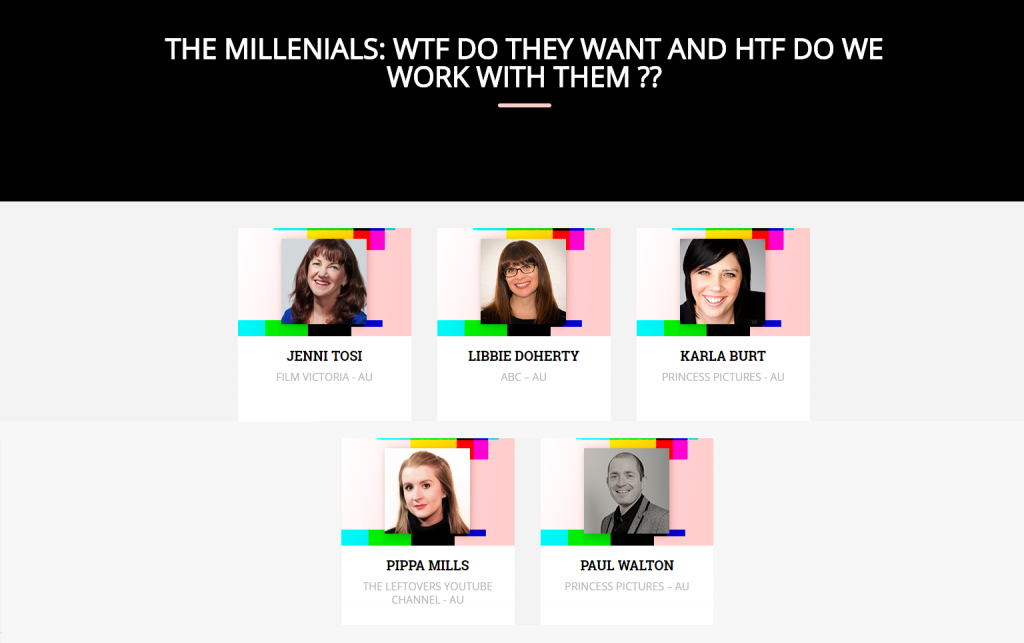 The panel included Karla Burt (Princess Pictures), Libbie Doherty (ABC Children’s Television), Pippa Mills (‘Leftovers’ webseries) and Jenni Tosi (Film Victoria) and was moderated by Paul Walton (Princess Pictures.) With the exception of Mills, the only millennial on the panel, our speakers have had a front row seat to changes in the industry as more and more young people seek to get in.

These days there is no pathway for moving up in the industry. At one point Paul referred to his experience ‘coming through the ranks’ when he was young, when there was a loose structure you could work through and make your way up. This idea was so idyllic and quaint to me. The difference today is there’s a lack of middle tier jobs in which one can pay their dues, develop their skills and move up. Talented crew who are ready for more, struggle to land the opportunity they need as these positions are usually filled by long serving crew. The younger crew stagnate, which is very frustrating to any dedicated, passionate person. A silver lining of this, highlighted by Karla, is that crew who are flexible and eager to learn take on any task available and are becoming multi-skilled knowledge machines. But no matter how hard we work, we can only go as far as the opportunities that are open to us. Screen Australia and the state agencies encourage and support internship and attachment programs for early-mid career practitioners but they simply can’t support everyone and as Jenni sees things, “it is incumbent on all of us to help each other.”

Millennials are known for being entrepreneurs who want to own their own businesses and do things their own way. We’re also commonly referred to as the entitlement generation. Our reputation is a distraction and every observational column from a “middle aged moderate” that doesn’t ‘get’ hipster cafes alienates one generation from another. We need to disregard the preconceptions and labels. As Jenni pointed out, “Often people say entitled, but they don’t mean it, it’s just easy to say. We have to realise that they (millennials) are interested in more than making their own content, they love the culture of screen and TV.” Similarly, Karla regarded the millennials in her staff to be some of the most hard-working, dedicated and collaborative people she’s worked with.

In the world of film and TV that entrepreneurial spirit is leading us to make a lot of web series and whilst they can help one get a foot in the door, we need to acknowledge that they’re not the Holy Grail. Thanks to modern technology and the internet it’s never been easier to make and distribute content. Anyone can make a web series and this is fantastic. But by encouraging teams to make web series as an alternative to the traditional industry pathway we create more and more division between the inexperienced and the experienced; those who need to learn and the teachers who have the knowledge. It encourages people to make their own projects and be their own bosses rather than joining in. Is that sustainable?

Making one web series doesn’t prepare a producer to make a television series, but is there a number that would? How many alternative roads must a millennial walk down before you can call them a qualified producer/writer/director? What if the web series you’ve invested $5,000 of your own hard earned hospitality savings in teaches you a lot but doesn’t get noticed? Or, what if your unassuming series ‘breaks the internet’ with millions of hits? For Libbie at the ABC, numbers of views are only ever a factor in commissioning further development to take a web series to TV and there’s no threshold of views that guarantees a future for the project; it always comes back to the quality of the story. Again, there’s no ‘pathway’ beyond web series and I’m not asking the world to make one, I’m pointing out a persistent message – we need unity. In web series we learn lessons ourselves the hard way but there’s only so much we can teach ourselves and only so much of a career we can build on our own, on the fringes.

As Libbie pointed out, broadcasters need production companies that can be trusted to deliver and this is where partnership comes into play. Partnering an experienced production company with an inexperienced creative team is of great benefit to both parties, especially in children’s television where younger teams can bring a fresh voice and perspective. But there needs to be an approach for individuals, too. Production companies who make long term in-house positions (Note: full time, paid, contracted positions – not just internships) for emerging creatives are rewarded with incredible results; a higher quality of work across the board, momentum for the future of the company and the great experience of mentorship.

Disclaimer time: The divide I’m speaking about is present in many industries, not just our own and I’m not suggesting that we’re in a crisis state. People are still working up the ranks and building careers. Struggling to get a foot in the door is not a woe that millennials have exclusive claim over; it’s difficult for any person of any age to get things going and as Jenni pointed out, you must manage your expectations. There are only so many jobs to go around and no generation is more deserving of work than another.

As a ‘youngin’ with aspirations that far outweigh my experience, the answer to the question posed by Thursday’s panel is simple. Millennials might be obsessed with Game of Thrones but we don’t look to it as a strategy guide for taking over the industry. I’m not trying to take the head of the table; I just want a seat somewhere in the group. WTF do ‘we’ want and HTF do ‘you’ work with us? We want to work with you, so we’re hoping someone makes space for us.